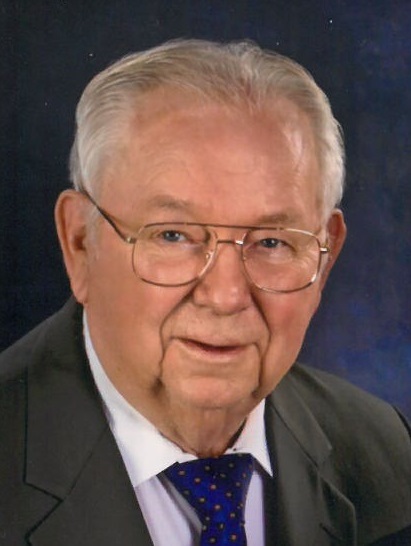 Robert John â€œBobâ€ Tholen was born on September 19, 1931, in Marshall, MN, to Frank and Marie (Van Anne) Tholen. Robert grew up, attended school and graduated from Marshall High School. He was baptized, received his sacraments and was a lifelong member of Holy Redeemer Catholic Church. From 1951 â€“ 1955, he served in the U.S. Navy Air Corp. On September 29, 1951, he was united in marriage to Harriet Schrunk in Norfolk, VA. After his service, the couple returned to Marshall where Bob partnered with his father in an automobile dealership. The family business, Tholen Auto Sales, grew to be a prominent automobile, truck and marine dealership. Bob was active with the Knights of Columbus and was a member of the American Legion, Veterans of Foreign Wars, the Marshall Planning Commission and was a member of the Board of Directors for the Minnesota Automobile Dealers Association. Bob and Harriet enjoyed traveling. In addition to many wonderful trips throughout the world, they especially enjoyed time at Punta Gorda, FL, and Lake Amelia surrounded by family. Robert died unexpectedly on Tuesday, July 10, 2018, at his residence in Marshall. He is survived by his wife, Harriet, of Marshall; son David (and Debbie) Tholen of Tucson, AZ, grandchildren Daniel (and Liza) Tholen, Heather (and Shane) Pffieffer, Katie Gregg and Sarah Gregg; daughter Deborah (and Kevin) Cattoor of Plymouth, grandchildren Christopher (and Emily) Cattoor, Benjamin (and Jessie) Cattoor, Patrick (and Kylie) Cattoor and Renee (and Brian) Salzer; son Rodney Tholen of Marshall and Richfield, MN, grandchildren Jonathan (and Sarah) Tholen, Michael Tholen, Jordan Tholen and Melissa Tholen; daughter Elizabeth (and Kenneth) Seifert of Andover, grandchildren Andrew (and Jess) Seifert, Adam Seifert and Sam Seifert; daughter Susan (and Steve) Sammons of Marshall, grandchildren Joshua (and Ashley) Sammons, Michelle (and Jordan) Jacobson, Jeremy (and Lacie) Sammons and Rebecca (and Jake) Bottelberghe, 20 great-grandchildren, siblings Carol Louwagie and Mary Grina (and Scott Peters) and many nieces, nephews, relatives and friends. He was preceded in death by his parents, son Richard Paul Tholen, brother Cornie Van Anne and brother-in-law Donald Louwagie.
To order memorial trees or send flowers to the family in memory of Robert (Bob) John Tholen, please visit our flower store.