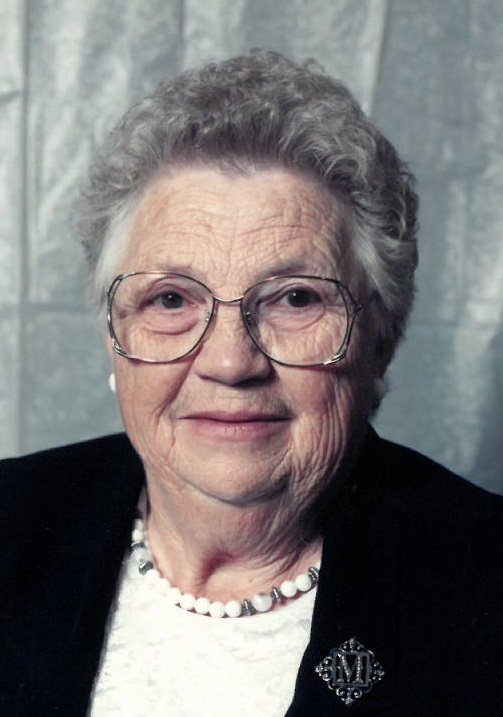 To access the recording of Mildred's service, click the Watch Webcast link under the Photos and Videos tab above, or copy and paste the following link into your web browser: https://youtu.be/KUeAxp7_824 Mildred was born to John and Amanda (Ehlers) Hauschild on December 13, 1925. She was baptized on January 3rd, 1926. Mildred attended the Bethlehem Evangelical Lutheran Church in Taunton, MN. She was confirmed on June 13, 1940. On June 30, 1939, she graduated from eighth grade from school district 54 of Lincoln County, MN. On December 13, 1945, she married Henry Riecke. This union was blessed with four children: Kenneth, John, JoAnn and Susan. The couple enjoyed playing cards with family and friends. They also loved going out dancing. Mildred was employed at the Marshall Produce and Schottâ€™s Corporation. On February 10, 1972, Henry was killed in a farm accident. Shortly after his death, Mildred moved down to her parentâ€™s farm to take care of her mother. Her mom passed away in August of 1976. In 1978, Mildred decided to take a month long trip to Germany and Italy to visit her two sons that were in the service. On October 16, 1982, she married Roseville â€œRozyâ€ Josephson. The couple enjoyed traveling and wood working. Rozy lost his battle with cancer in 1988. Mildred continued living on the farm in Yellow Medicine County until she moved to Marshall in 2012. In May of 2016, Mildred moved to the Minneota Manor. She continued her hobbies of crochet, sewing, crafts and tending to her plants. Many afternoons, you could hear her listening to old time music or you could find her out in the courtyard playing with cats. Even being 90 and living in the nursing home, she continued with her hobbies. Mildred made 10 lap sized quilts and crocheted several afghans. Many of the residents knew she had a sewing machine and would bring things to her for repair. Mildred was famous for her match stick crosses and even sold them to the residents. Her room was like a floral shop because she had so many plants. She loved watching the birds and squirrels that came to her feeder. She was computer savvy and enjoyed playing solitaire. She loved doing puzzles with the residents but when they took that away due to covid, she continued doing them on her computer. The last two months, when she wasnâ€™t able to leave her room, she learned to skype. Mildred died on Monday, January 4, 2021, at the Minneota Manor in Minneota. She is survived by her daughters JoAnn Styrbicky of Cyrus, MN, and Susan Furan of Tyler, MN; grandchildren Dale Riecke of Hartford, MN, Mike (and Michelle) Riecke of Waseca, MN, Theresa Riecke of Waseca, MN, Fred Riecke of Owatonna, MN, George (and Lisa) Riecke of Lacey, WA, Patrick Riecke of Graham, WA, Billie Riecke of Graham, WA, Allen (and Sherry) Roberts of Madison Lake, MN, Melissa Zipper of Glenwood, MN, Doug Roberts of Breckinridge, MN, Tom (and Robin) Roberts of Jamestown, ND, Heidi (and Shannon) Buchert of Russell, MN, Heather Furan of Tyler, MN; daughter-in-law Patty Riecke of Graham, WA; 24 great-grandchildren and one great-great-grandchild. Also survived by step-children Rosella Wimmergren of Minneota, MN, Deanna Rodina of Taunton, MN, Laurie (and Dean) Breyfogle of Taunton, MN, Gary Josephson of Minneota, MN and Dale Josephson of Young America. She was preceded in death by her parents John and Amanda Hauschild, husbands Henry and Roseville; sons Kenneth Riecke and John Riecke; step-children Shirley Josephson and Darryl Josephson; son-in-law Bill Furan; siblings Arnold Hauschild, Mary Lou Mattson, Carol Harms; brothers-in-law Don Harms and James Mattson, and niece Diane Fisher.
To order memorial trees or send flowers to the family in memory of Mildred Josephson, please visit our flower store.