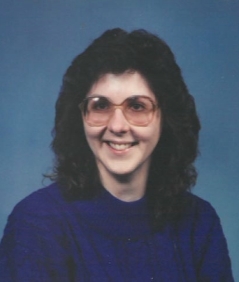 Linda Marie (Taveirne) Jenniges was born on April 5, 1959 to Donald and Lorraine (Marczak) Taveirne in Marshall, Minnesota. She was baptized at Holy Redeemer Catholic Church, and made her First Communion and Confirmation at St. Dionysius Catholic Church in Tyler. She attended school in Balaton and graduated in 1977. She then went to Granite Falls Technical College and graduated in 1978. After school, she worked at B.H. Electronics in Redwood Falls. On July 9, 1983, Linda was united in marriage to Myrland Jenniges at St. Catherine Catholic Church in Redwood Falls. Over the years, they moved to several different communities. Linda had her own daycare from 1993 until 2007. She enjoyed garage sales, reading mystery novels, listening to music, and loved spending time with her children, grandchildren, and family. On Monday, July 4, 2016, Linda passed away, surrounded by her family, at the Morningside Heights Care Center in Marshall, Minnesota at the age of 57. She is survived by her children, Michael (Paul) Jenniges of Eden Prairie, Andrew (Chelsy) Jenniges of Storden, Matt Jenniges of Marshall, and Adrian (Jackie) Jenniges of Lynd; mother, Lorraine Taveirne of Tyler; grandchildren, Rylee, Callee, Cooper Jenniges; siblings, Greg (Kathy) Taveirne, Dan (Pat) Taveirne, Kathy (Doug) Schwantes all of Russell, and Danelle (Paul) Taveirne of Garvin; and many nieces and nephews. She was preceded in death by her dad, Donald Taveirne. Blessed be her memory.
To order memorial trees or send flowers to the family in memory of Linda Marie Taveirne Jenniges, please visit our flower store.