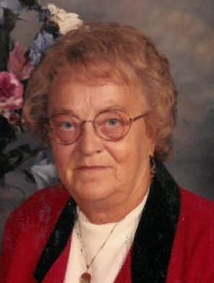 To watch the service, paste the link into your browser: Note: Audio starts about 5 minutes into the service https://youtu.be/OfduqaJXka8 Lilly Emilie Koepp was born on May 28, 1926, in Greenleaf, MN, to Carl and Minnie (Roepke) Koepp. She attended country school and graduated from Litchfield High School. Lilly was married to Clarence Tritz and to this union were born children Sandra, James, Brenda, Diane, Gordon, William, Pamela and Richard. The family lived in Tracy until moving to Cottonwood in 1960. Clarence died in 1966. Later, Lilly went to work for the Cottonwood Municipal Liquor Store. She tended the bar and managed this business for many years. Lilly was united in marriage to John Kerkvliet and the couple continued to live in Cottonwood. Lilly was a good mother, grandmother and friend. She enjoyed cooking and entertaining. She was an active member of St. Maryâ€™s Catholic Church where she belonged to CCW, taught Catechism, and volunteered at most pot lucks, fall dinners and annual programs. She was also active as a Boy Scout supporter and belonged to the American Legion Auxiliary and served at Senior Dining. Lilly had a lifelong passion for fitness and well-being. She enjoyed bike riding with her kids and dog, Sasha. She also enjoyed walking, golfing and fishing. She was an avid embroiderer, collected dolls, Christmas Villages and other items. She enjoyed Disney Movies, dancing, country music, parlor games and cleaning. She was passionate about travel and enjoyed local, domestic and international trips. Lilly was a sports fan and enjoyed sports, activities, proms and Christmas Programs for her children, grand and great-grandchildren. She was an animal lover and enjoyed her pets Heidi, Penelope, Paw Paws and Toe Toes. Lilly died on Tuesday, December 1, 2020, at Heritage Lane Care Center in Marshall. She is survived by her children Sandra (and John) Henrichs of Bellevue, WA, Brenda Tritz of St. Cloud, Diane Boe of Lynd, Gordon Tritz of Cottonwood, Pamela (and Francis) Okia of St. Cloud, Richard Tritz of Marshall, ten grandchildren, nine great-grandchildren and one great-great-grandchild and sister, Violet Danielson of Atwater. She was preceded in death by her parents, sons James and William, grandson Isaiah Chinye Okia, son-in-law Ernest, five brothers and six sisters.
To order memorial trees or send flowers to the family in memory of Lilly Emilie Kerkvliet, please visit our flower store.