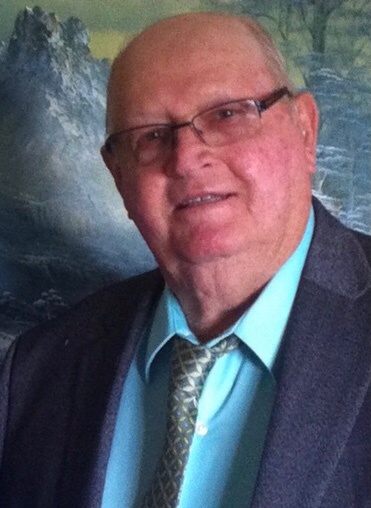 James Gerald Regnier was born on October 12, 1932, to Philip and Evelyn (Wyffels) Regnier of Ghent. He attended Ghent Catholic School through eighth grade, afterwards he worked on the family farm. On December 28, 1955, James was united in marriage to Edna Dunteman of Tracy. The couple lived south of Minneota where they raised hogs and farmed land. In addition to farming, Jim found enjoyment as a Kent Feeds Salesman for many years. Jim and Edna continued to live on the farm after retirement. In May of 2019, they moved to Heritage Pointe Senior Living in Marshall. After Jimâ€™s retirement, he still enjoyed keeping a close eye on what his sons were doing each day on the farm. He did this by driving around on his side-by-side. He also loved to drive this to go and visit with his neighbors. Driving his side-by-side gave him many hours of enjoyment, and even after moving to Heritage Pointe, he would occasionally come to the farm to ride it. He also loved watching Westerns on TV, and spending time with his family. He loved having his grandchildren and great-grandchildren come to visit. Jim was a member of Holy Redeemer Catholic Church in Marshall. Jim died on Sunday, December 20, 2020, at the Avera Morningside Heights Care Center in Marshall. He is survived by sons Phillip (and Renee) Regnier of Brooklyn Park, Warren (and Rita) Regnier of Marshall, Duane (and Theresa) Regnier of Lynd, Keith (and Lisa) Regnier of Lynd, and daughter Nadine (and Jim) Mayo of Crystal; 15 grandchildren and 25 great-grandchildren. He was preceded in death by his parents, wife Edna (three weeks ago,) brothers Elroy (and Mavis) Regnier, Norbert (and Mary) Regnier, Gerald Regnier and sisters Eileen (and Chuck) Culshaw and Delores (and Walter) DeCock.
To order memorial trees or send flowers to the family in memory of James Regnier, please visit our flower store.