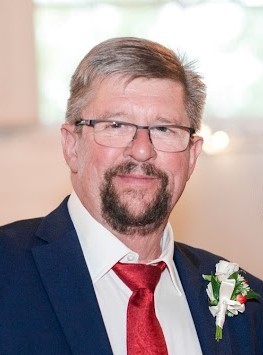 James Joseph Novosad (Jim) was born June 18, 1952 in Gaylord, MN to James and Lois Novosad (Bedore). Jim grew into an intelligent, caring, hardworking, witty, and loving son, husband, father, and grandpa. He graduated from Marshall High School in 1970. Jim met his beautiful wife, Margaret (Maggie) Mary Paradis in 1974 and they united in marriage two years later in 1976 at Holy Redeemer Catholic Church in Marshall, MN. The couple made a life together in rural Marshall. Jimâ€™s pride and joy was his familyâ€”Maggie and Jim were blessed with three beautiful son: Eric, Lucas, and Jacob. Jim had a passion for music and shared his talents often. Jim participated in many bands including the well-known local favorite â€œCavemen.â€ He enjoyed riding his motorcycle, especially with his brother Greg. He also was an avid Minnesota sports fan as well as attending local Marshall Activities. Jim also enjoyed cooking and spending time with his family. Jim traveled the country for 42 years as an over the road truck driver discovering Diners, Drive-Ins-and Dives. Later in life, the family grew with three Daughters-In-â€œLovesâ€â€”Melissa, Jessica, and Alyxis, and continued to grow with many grandchildren. Jim had a big heart for service. He enjoyed singing with the church resurrection choir and was always willing to lend a helping hand for anyone in need. Jim died suddenly yet peacefully as a result of an apparent heart attack in his home surrounded by memories of all his loved ones on 11/25/2020. He is greatly missed by his wife of 44 years Margaret, mother Lois Novosad, siblings Kathy (and Mark Hanson), Greg Novosad (and Katie), Polly Bieber, children Eric (and Melissa), Lucas (and Jessica) and Jacob (and Alyxis), and grandchildren Jayden, Ethan, Brooks, Meike, Joie, and one due to arrive in March 2021, and many extended family and friends. Jim was preceded in death by his father, grandparents, and brother-in-law Tom Smith.
To order memorial trees or send flowers to the family in memory of James "Jim" Joseph Novosad, please visit our flower store.

Walk through visitation. Masked are required and social distancing guidelines will be followed.

Walk through visitation. Masked are required and social distancing guidelines will be followed.

Masked are required and social distancing guidelines will be followed.