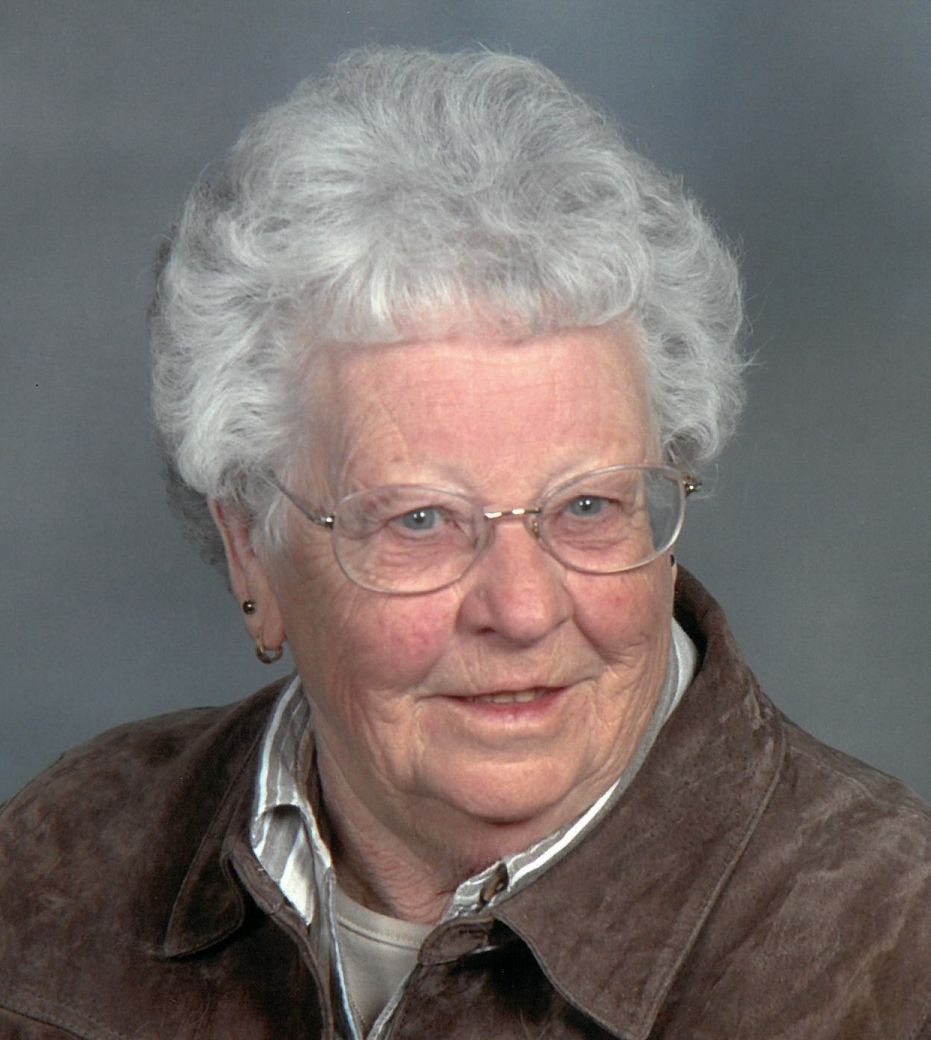 Funeral services for Inez Peggy Ashling, 96, of Marshall will take place at 11:30 a.m. on Friday, August 5, 2022, at Christ United Presbyterian Church in Marshall.  Visitation will be one hour prior to the services from 10:30 to 11:30 a.m.   Interment will be at a later date at Fort Snelling National Cemetery, Minneapolis, MN.

Peggy was called home by her loving Savior on July 22, 2022, at the Good Samaritan Society - Albert Lea, in Albert Lea, MN.

Peggy Ashling was born on September 2, 1925, to parents Frederick Henderson Carter and Alice Josephine (Carlsvard) Carter in Whiting, IA.  She was baptized and confirmed in the Presbyterian faith.  During her childhood and young adult years, she lived with her family in Dawson and Marshall, MN.  She graduated from Marshall High School in 1944.  After graduating from high school, she traveled to Sheridan, WY, and attended business school, boarding at her uncle’s (Charles Carter) home.

On June 11, 1945, Peggy was united in marriage to Donald Merle Ashling in Dawson, MN, and the couple moved to Marshall to make their home.  She resided in Marshall for over 75 years.  Due to declining health, she moved to her son and daughter-in-law’s home in Albert Lea in December 2019, and later resided at the Good Samaritan Society - Albert Lea.

She was a devoted wife, homemaker, stay-at-home mom, and loving grandmother.  For many years, she was a bookkeeper for her husband’s business in Marshall, Don’s Repair Shop.  Later she was employed by Schwan’s Company for 18 years, retiring at the age of 72.  Using her creative talents, she also taught ceramics in her home.

Peggy enjoyed spending time with her family, shopping and dining with her friends, and especially watching her grandchildren grow up throughout the years.   She often traveled to Estherville, IA, and Albert Lea, MN, to attend her grandchildren’s activities.  A special time in her life was being able to spend over 20 years vacationing at Lake Carlos in Alexandria with her sons, daughter-in-law, and grandchildren.  Many touring adventures were taken with her family and friends along with a trip to Sweden with her sister Betty to visit her mother’s heritage.  She was an avid reader – always having a book in her hand.  Exercise was a priority in her life – going to the Marshall Area YMCA until age 92.  Sunday evening phone conversations with her granddaughter Jana throughout the years were very special to her.

Peggy was a faithful member of Christ United Presbyterian Church for 70 plus years.  She was a life member of the Marshall VFW Auxiliary and served as secretary for many years.

Left to cherish her memory are her son, Rick (Bonnie) Ashling of Albert Lea, MN, and her granddaughters Jana (Brian) Livingston of Lewiston, ID, and Jessica Stier of Burnsville, MN, and many nieces and nephews.  She is also survived by granddaughter-in-law Stacy Dougherty of Bemidji, MN, and sister-in-law June Carter of Marshall.

Peggy was preceded in death by her parents; husband Donald on April 28, 1988; son Jack on August 26, 2006; and grandson Jay Ashling on February 6, 2006; and sisters Geraldine Dahl, Betty Bearl, and Irene Morrow, and brother Carl Carter.

Blessed be her memory.

To order memorial trees or send flowers to the family in memory of Inez Peggy Ashling, please visit our flower store.