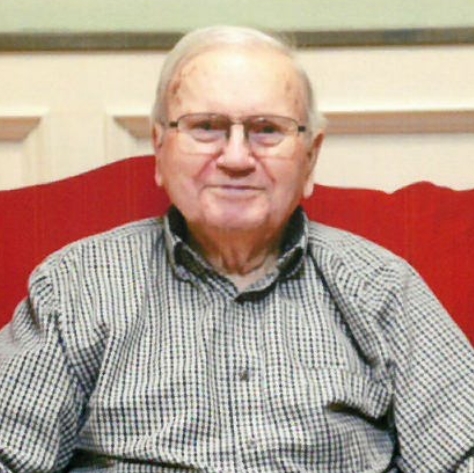 Earl Joseph LaVoy was born on November 5, 1916, to Arthur and Catherine (Paradis) LaVoy. He was baptized, received First Eucharist and was confirmed at St. Clotilde Catholic Church in Green Valley. He attended school in Fairview and Vallers Township and Marshall Senior High School. On May 25, 1943, Earl was united in marriage to Marie Engels at St. Eloi Catholic Church in Ghent. Earl and Marie farmed for 39 years in Vallers Township near Cottonwood. Earl was also employed for 26 years as a dealer and county manager for Archer Oil of Omaha, Nebraska. Earl served on the building committee in 1953 to construct the St. Maryâ€™s Catholic Church in Cottonwood and became a charter member of the church. He served on the ASC board, Marshall Shipping Association board, and volunteered for the Weiner Memorial Hospital Auxiliary. In 1981 Earl and Marie retired and moved to Marshall. He enjoyed playing golf, cards, and visiting with friends. Earl will be remembered for his patient, gentle demeanor. Earl is survived by his brother, James (Kate) LaVoy of Marshall; sister, Joan Derynck of Marshall; sister-in-law, Rita LaVoy of Marshall; many nieces and nephews. He is preceded in death by his wife, Marie; parents, Arthur and Catherine LaVoy; sisters, June (Joe) Boerboom and Eleanor (Gus) Boerboom; brothers, Lawrence (Ardis) LaVoy and Harold LaVoy; and brother-in-law, Robert Derynck. Memorials are preferred to the Holy Redeemer School. A Mass of Christian Burial will take place at 11:00 A.M. on Wednesday, July 11, 2018 at 11:00 A.M. at Holy Redeemer Catholic Church in Marshall with a visitation taking place from 9:00 A.M. -11:00 A.M., also at the church. Burial will take place at Green Valley Cemetery. Memorials are preferred to the Holy Redeemer School.
To order memorial trees or send flowers to the family in memory of Earl Joseph LaVoy, please visit our flower store.