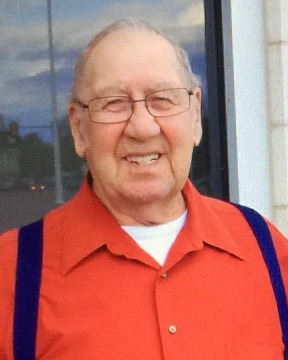 Don grew up with 13 siblings (7 brothers and 6 sisters).  Frank and Fanna moved their family from Chandler to Garvin, MN, when Don was 5 years old.

Don met Janyce Marie Blanchard when he was 17 years old.  More than likely when he was cruising around in his beloved ’39 Ford.  There are many stories about the first time they met, but a few years earlier Don fell head over heels for Janyce at first sight.  Janyce was on a bridge in Garvin fishing with her parents and when he saw her he was smitten.  They didn’t meet that day but fate brought them together again!  Don dated Janyce for two years before he bought her a ring.  They were married February 2, 1957, three years after they first met.

They made their first home in Lynd, MN, and later moved to a farm between Ghent and Marshall.  Ultimately they moved to Minneota, MN, with their three children (1 boy and 2 girls).  Their fourth child (boy) was born in 1966.  While living in Minneota Don ran the Minneota fur farm and worked in carpentry.  Eventually he started his own carpentry and handyman business until his retirement.  Don also served in the Army National Guard for 9 1/2 years.  He cooked for the troops in his younger years and for many of us most of his life.

Don adored his family, he enjoyed taking them camping, fishing and going for long rides in the country - while singing songs along the drive.  He enjoyed making homemade ice cream and decorating for the holidays.  He loved traveling, seeing and experiencing new things with Janyce. They also traveled with their eldest son Duane and his family, and occasionally with his daughter Brenda and her family.  In later years his travels were curtailed to adventures closer to home, but he still loved it all.

After retirement Don’s hobbies were crafts and woodworking.  He really enjoyed all his creative projects.

Don was a man with many stories.  Sometimes they were true and sometimes not.  He was full of bull, nonsense and could talk the leg off nearly everyone.  He will always be remembered for his generosity in all things.  He gave freely to family and friends whenever and in any way he could.

You will be missed Don Sanow!  Your stories and bull will be repeated throughout the generations of your family.  You will not be forgotten.

To order memorial trees or send flowers to the family in memory of Donald Duane Sanow, please visit our flower store.