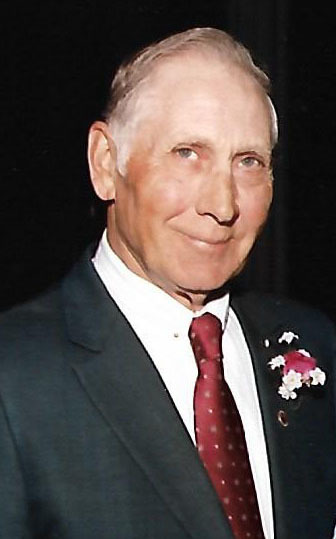 Anthony â€œTonyâ€ Frank Winter was born on June 25, 1922, and raised on a farm near Wilno, MN. He was the seventh child of Frank and Anna (Ott) Winter. Tony attended St. John Cantius Catholic School. He was a member of St. John Cantius Church in Wilno where he received his holy sacraments and served Mass as an Alter Boy. Tony was united in marriage to Irene Jerzak on November 25th, 1941, at St. John Cantius Catholic Church. They farmed west of Taunton until 1959. Tony became a lifelong member of St. Edward Catholic Church and served as an usher. He also worked in various forms of construction throughout his life. Tony raised farm animals, and enjoyed large gardens until he retired in 1992. At that time, he and Irene moved into the Madison Avenue Apartments Assisted Living Facility. Tony loved music. He loved to dance, was a talented singer and could play the harmonica and guitar. His musical talent was self-taught. He also taught his children how to play. His favorite song was â€œThe Green Green Grass of Homeâ€ which he played and sang at all of the family events. Tony became a resident of the Minneota Manor in January, 2016. He continued to use his musical talents to entertain the residents on several occasions. Tony died on Saturday, June 24, 2017, at the Minneota Manor in Minneota one hour and 49 minutes short of this 95th birthday, surrounded by his loving family. He is survived by his children Jeanette (and Dick) Stoks of Shakopee, Paulette Spanton of Shakopee, Darlene Josephson of Minneota, Terry (and Deb) Winter of Minneota, Deb (and John) Malone of Shakopee, 12 grandhchildren, 29 great-grandchildren, six great-great grandchildren, sister-in-law Florence Winter of Ivanhoe, nieces, nephews, relatives and friends. He was preceded in death by his parents, his wife of 52 years, Irene, sons-in-law Dick Josephson and John Spanton, brothers Michael, Andrew and Bobby and sisters Margaret, Pauline, Julia and Sophie.
To order memorial trees or send flowers to the family in memory of Anthony "Tony" Frank Winter, please visit our flower store.